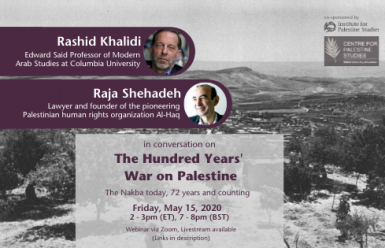 The Hundred Years’ War on Palestine is a landmark history from a foremost US historian of the Middle East, told through pivotal events and family history. Drawing on a wealth of untapped archival materials and the reports of generations of family members—mayors, judges, scholars, diplomats, and journalists—Rashid Khalidi upends accepted interpretations of the conflict, which tend, at best, to describe a tragic clash between two peoples with claims to the same territory. Instead, he traces a hundred years of colonial war on the Palestinians, waged first by the Zionist movement and then Israel, but backed by Britain and the United States, the great powers of the age.

The webinar is accessible via ZOOM, register for the link. It will also be livestreamed on our social media @PalStudies on Facebook.

​Rashid Khalidi: is the Edward Said Professor of Modern Arab Studies at Columbia University and most recently the author The Hundred Years’ War on Palestine.

Raja Shehadeh: is a leading Palestinian writer. He is also a lawyer and the founder of the pioneering Palestinian human rights organization Al-Haq, and the author of the recently published book Going Home. 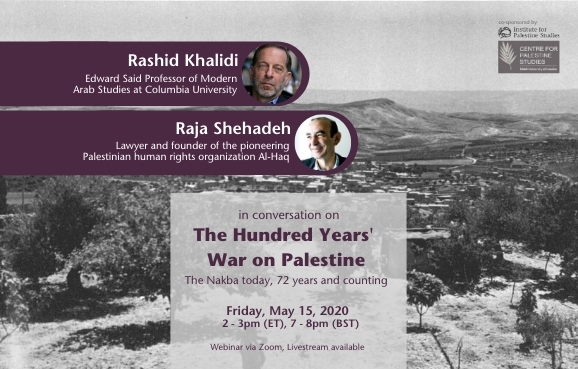