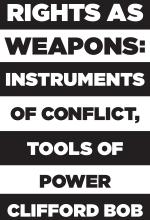 “How and why are rights used for aggressive purposes?” (p. 2). This is the central question Clifford Bob sets out to answer in Rights as Weapons: Instruments of Conflict, Tools of Power. The author answers this question by providing a typology for classifying various tactics in which actors use rights in offensive, aggressive, defensive, and calculated ways against opponents. The breakdown is thorough and analytically useful beyond the cases he uses for empirical assessment.

Bob, a professor of political science at Duquesne University, has focused his career on the study of transnational civil society and has made important contributions to this field with previous works such as The Global Right Wing and the Clash of World Politics (2012) and his earlier book The Marketing of Rebellion: Insurgents, Media, and International Activism (2005), both published by Cambridge University Press. Throughout his work, analysis of rights-based advocacy has been consistently highlighted. In this most recent of his books in this area, Bob challenges the reader to think beyond the ways in which we would normally conceive of rights. He uses an analytical frame that does not define rights within a moral context, which then allows us to think of rights as claims.

Within the context of human rights, we often think of rights as an entitlement that protects the weak against the powerful. But just as other weapons, rights can be deployed also, and often, by the powerful against the weak. Bob reviews how rights can be used as “rallying cries” (to mobilize support [chapter 2]), “shields and parries” (to counter threats [chapter 3]), “camouflage” (to mask motives [chapter 4]), “spears” (to overturn laws [chapter 5]), “dynamite” (to destroy cultures [chapter 6]), “blockades” (to suppress subordinates [chapter 7]), and “wedges” (to break coalitions [chapter 8]).

For example, in chapter 2, Bob explains how rights can be used as rallying cries, which he defines as the “use of rights within a political movement to mobilize support among the movement's constituents and its potential third-party allies” (p. 27). Types of rallying cries broken down in the chapter include “humanizing and naturalizing,” “universalizing,” “depoliticizing,” and “absolutizing.” In chapter 4, the author looks at how animal rights in the conflict around Catalonia show how “adaptable nationalist politicians exploit rights that extend well beyond those of their own communities to advance their cause and hurt their foes” (p. 78). Animal rights groups and Catalan nationalists found common cause in a common enemy: Spain's Constitutional Court and Castilian domination. Throughout the book, Bob weaves analytical categories with case evidence that illuminate the often-unseen underside of rights advocacy.

For readers familiar with the topic of and discourse around Israel/Palestine, Bob cites several examples of rights as weapons that should be eminently familiar. For example, he references Nicola Perugini and Neve Gordon's book, The Human Right to Dominate (Oxford University Press, 2015), in which they demonstrate that “Israel's Jewish settlers now employ indigenous and property rights to deprive Palestinians of land and ultimately to undermine Palestinian activism, if not Palestinian society itself” (p. 7). Further, in describing rights weaponized as “wedges,” Bob explains the use of pinkwashing by Israel as an effort to weaponize LGBT rights to divide the Palestine solidarity movement. “LGBT rights are a useful tool for backers of Israel aiming to weaken the international support network for the Palestinians. … When a political tactician inserts a wedge, he seeks to exploit and widen these latent cracks in the opposing coalition to gain an advantage in the larger conflict. Put another way, rather than making a frontal assault on the foe or the core issues, the tactic represents a flank move against the foe's support coalition, using a rights claim to loosen vulnerable members” (p. 187).

In sum, Bob's contribution in Rights as Weapons builds on his previous work as well as the work of others who have developed the literature on the role of civil society in international relations and contentious politics toward advancing an understanding of civil society not merely as a countervailing force to the traditional forces of power politics but rather as a unique arena in which traditional power politics can play out in different ways, including through the weaponization of rights. “As tools of politics,” Bob writes in the book's conclusion, “rights can be put to any number of defensive and offensive uses” (p. 217).

Clifford Bob stresses that this realpolitik assessment of rights is not intended to pass a supportive moral judgement on the use of such weapons by the powerful against the weak but rather to provide a clear-eyed analytic framework for understanding how rights are utilized by different actors with varied relationships to power. In doing so, he has provided students and scholars of international politics and civil society a useful guide.