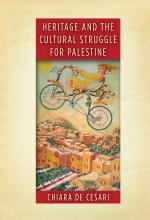 Chiara De Cesari's Heritage and the Cultural Struggle for Palestine is the product of fifteen years of research and writing on heritage making, cultural preservation, and resistance through development in Palestine. De Cesari—an anthropologist and senior lecturer of European studies and cultural studies at the University of Amsterdam—has authored numerous articles and coedited an anthology on transnational memory, but this is her first book. De Cesari conducted the bulk of the research for this book in 2005 and 2006, over a fifteen-month period, with short trips to the region in subsequent years. The book is an ethnography that focuses on the proliferation of urban regeneration initiatives and museums in the West Bank and East Jerusalem by Palestinian nongovernmental organizations (NGOs). De Cesari argues convincingly that NGOs and museums are initiating processes of institutionalization and governance in the absence of a stable state and against the daily struggles produced by Israeli settler colonialism, while putting Palestine (unofficially) on the map through their involvement in transnational cultural and development processes.

In chapter 1, De Cesari focuses on historical efforts toward heritage preservation sans state building before and after 1948 by Palestinians. She focuses on two main shifts: the first is before 1948, when Palestinian intellectuals worked to document Palestinian culture and folklore; and the second begins in the 1960s, when the Palestinian liberation movement politicized peasant material culture to shape a collective Palestinian identity and history based on a specific narrative using music, dance, and embroidery with deep connections to historic Palestine. The rest of the book focuses on De Cesari's larger thesis regarding development by way of heritage making. De Cesari documents how certain organizations have shifted from practicing and protecting folklore to initiating urban regeneration and creating museums (p. 197) and argues that Palestinian heritage organizations are resourcefully developing state-like institutions despite the insurmountable difficulties of statelessness, Israeli military occupation, and settler colonialism (p. 200).

Chapters 2 and 3 focus on two NGOs: the Hebron Rehabilitation Committee (HRC), founded by Yasir Arafat to gain control of the Old City over Israeli settlers but lacking formal political power, and Ramallah-based Riwaq, which focuses on restoring old Palestinian buildings, helps draft legislation and bylaws on heritage preservation, and maintains a national registry of historic buildings in Palestine (p. 120). While De Cesari's argument about NGOs taking over state-building efforts is an important one, this argument could have been stronger if she had more deeply engaged with the literature on the adverse effects of NGOization on Palestinian civil society. She cites all the relevant works but does not fully connect the ways HRC and Riwaq respond to the consequences of their establishment such as disruption of social cohesion, the creation of an elite population as a side effect of professionalization, and the loss of grassroots mobilization efforts. For example, De Cesari discusses the social fallout in the Old City of Hebron as the HRC brings people from all over the West Bank to live in the city's buildings to prevent it from becoming a ghost town, but she also indicates that the HRC, which depends heavily on foreign development agencies to maintain its programming and support of the Old City's residents (pp. 90–97), has not been able to stop Israel from advancing its plans to settle more of the Old City. Just recently, Israel announced that it would be razing the Old Hebron Market to build a new Jewish settlement.

In chapter 4, De Cesari examines the ways in which private citizens and NGOs have taken it upon themselves to create museums in light of the Palestinian Authority's failure to create a national museum. During the post-Oslo period, Palestinians saw a need to display the collective Palestinian experience in public spaces (p. 176). De Cesari argues that these efforts—like the newly built Palestinian Museum—institutionalize heritage work, “promote radical, democratic practices,” and provide a space for citizens to participate in the making of a Palestinian state (p. 194), and furthermore, that heritage and culture making provide an avenue for “material claims to sovereignty” (p. 5). Palestinians connect to the land through their lived experiences and cultural practices. While this argument is a critical one because these spaces keep Palestine alive locally and globally, it does not take into account the role of foreign funding and its influence on NGOs and their projects, as other scholars such as Rema Hammami, Tariq Dana, Sari Hanafi, Linda Tabar, Toufic Haddad, Raja Khalidi, Sobhi Samour, and Mandy Turner have explored.

This book provides an important opening for a critical discussion regarding the ways in which the word “Palestine” has not lost meaning and the ways in which Palestinians continue to assert their existence tangibly despite an aggressive and unrelenting Israeli settler-colonial project bent on erasing Palestinians as natives of the region. De Cesari also illustrates the ways in which Palestinian NGOs expertly inserted Palestine in the development narrative on a global scale. A further investigation of her informants' ambivalence toward a state and its impact on their work would have been welcome. What does statehood mean to them? The NGOs she focused on work in the absence of state institutions, but is the role of a state only to draft policies, provide some limited services to a certain group of citizens, maintain some semblance of sovereignty, and help build a more aware citizenry? What about advocating for legal and civil rights for all or working to dismantle the Israeli settler-colonial project?