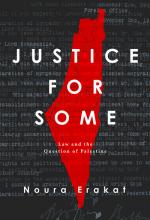 Justice for Some: Law and the Question of Palestine is both a book about Palestine and a meditation on the risks and benefits of international law for national liberation movements in pursuit of decolonization and emancipation. The book briskly covers an enormous expanse of Palestinian history, as refracted through the international law framings that have facilitated Palestinian dispossession. Much recent scholarship on legal aspects of the Palestinian case has focused on the rise and demise of the Oslo peace process. In contrast, Noura Erakat provides a comprehensive history of the conflict centered on the international law dimensions of the Palestinian struggle. She does this in fluid, accessible prose, setting forth arguments of equal interest to scholars of international law and of Middle East studies, as well as broader audiences.

There are two important concepts that recur throughout. The first is “legal work,” a term Erakat borrows from Duncan Kennedy to convey how powerful actors' deliberate efforts to bend legal doctrine to their objectives may serve to transform law (p. 7). She demonstrates how legal work has been central to Israel's expansionist project, from the legal entreaties that enabled Jewish settlement in Mandate Palestine after World War I, to the use of international institutions and frameworks to gain recognition for Jewish sovereignty following World War II, to the use of martial law, occupation law, and the rubric of a “peace process” to expropriate Palestinians and facilitate settler colonization of their lands over the last seventy years.

The second equally significant concept for Erakat's work is that of the “sovereign exception,” drawing on the writings of Giorgio Agamben and others (p. 15). Erakat shows that from the Mandate period to the present, British and Israeli officials have wielded sovereignty to manufacture exceptional categories of law that exclude Palestinians from the benefits of otherwise applicable protections. The ability of the British and the Israelis to suspend and/or adapt international law in the case of Palestine is, for Erakat, a form of sovereign exception producing not lawlessness but the adaptation of the law. The original sovereign exception was the British decision to use its mandate authority to support the establishment of a Jewish national home in a territory where the native Palestinian population's corresponding right to self-determination was effectively suspended. From this flows the sui generis framework that resulted in the United Nations (UN) partition plan, the erasure of the juridical status of Palestinians as a people and, following the establishment of the State of Israel, the removal, dispossession, and containment of the Palestinian population.

These two concepts allow Erakat to analyze the legal strategies deployed by Israel to consolidate control over territory after 1949 and eventually to occupy and colonize the remaining Palestinian territories after 1967 (chapter 2). But she also examines Palestinian legal work to pursue international recognition of national liberation movements (chapter 3) and, in the context of their armed struggles, what Erakat aptly describes as the “right to fight” (p. 107). She shows how these efforts shaped the 1977 additional protocols to the Geneva Conventions, which extended international humanitarian law to address wars of national liberation. Even more striking is her detailed account of how Palestinian leaders gained recognition for the Palestine Liberation Organization (PLO) at the UN, illustrating both the significant legal victories won by the PLO and the limits of advocacy at the UN.

The book makes fascinating use of Erakat's original interviews with principals from the delegations on both sides involved in Israeli-Palestinian negotiations (chapter 4). Through these interviews, she offers fresh insights into how and why the PLO eventually exchanged hard-won international recognition of Palestinian rights for a bilateral and politically defined peace process brokered by the United States. She also shows how the legal framework engendered by Oslo—with the PLO's acquiescence—accelerated the dispossession and containment of Palestinians. Ultimately, she argues that “the buy-in and collaboration of the Palestinian leadership” has become essential to Israel (p. 218).

Turning to the period from the outbreak of the Second Intifada (2000) to the disengagement from, and subsequent siege of, Gaza (2005 to the present), Erakat addresses how Israeli legal work reverberates throughout the international order (chapter 5). Her account of the Israeli strategy of breaking laws to make new laws is incisive. An interview with Daniel Reisner, the head of the Israeli military's international law division, yields a concise statement of this approach: “The whole of international law is now based on the notion that an act that is forbidden today becomes permissible if executed by enough countries” (p. 186). Israeli advocacy for broad recognition of its own sui generis interpretations of the lawfulness of so-called preemptive self-defense and targeted assassination, and its preferred interpretation of so-called direct participation in hostilities and force protection have left Gazan (and other Palestinian) civilians vulnerable to indiscriminate and disproportionate military attacks (p. 205). Moreover, Israeli campaigns to legitimize such interpretations have produced new legal understandings that compromise civilian protections worldwide in the context of the U.S.-led “war on terror” (pp. 188–91).

Justice for Some provides a gripping and sobering account of the ways that law serves the powerful by intensifying the vulnerability and disempowerment of those it targets. But Erakat also acknowledges international law's “counterintuitive utility” (p. 13) when weaker actors use strategic and tactical ingenuity to leverage the law's emancipatory potential. That said, as Erakat shows, the law alone will never recalibrate the balance of power.

In this elegantly written and carefully argued book, Erakat strikes a delicate balance that makes an important contribution to the scholarly literature on both Palestine and critical international law. She combines a profoundly realistic assessment of the limits of international law with a hopeful account of the power of political mobilization, armed with the normative force of law, and argues compellingly that the pursuit of a political strategy for emancipation should embrace principled legal opportunism. Erakat's clear-eyed analysis is not only an excellent account of the law and politics of the Palestinian struggle but also a remarkable and often inspiring assessment of the relationship between law and liberation.