The Journal of Palestine Studies is pleased to announce the release of its 193rd issue, which spans eight decades of modern Palestinian history.

Articles in this issue include the first of a two-part series by Laila Parsons on the secret testimony to the Peel Commission; an eye-opening account by Jeannette Greven of the United States’ security coordination policy with the Palestinian Authority, and how that policy has fed the global “War on Terror”; and a microhistory, by Dan Tsahor, of the 1950 depopulation of Zakariyya.

Also featured is a special document file, including analysis by Seth Anziska, that offers fresh insights into a damning “migration report” uncovered by Israeli human rights organization Akevot in the summer of 2019—an insider account of the premeditated efforts by Israel’s early military formations to depopulate Palestinian localities during the Nakba. 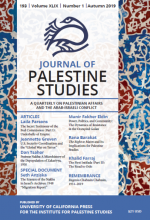