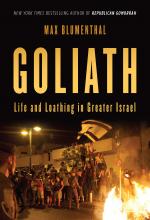 Max Blumenthal’s Goliath generated significant discussion upon its release—including a protracted debate between Blumenthal and Eric Alterman in the pages of the Nation— and considerable criticism of the book’s lack of objectivity. The debate and criticism, however, usually missed the point: Blumenthal presents a preponderance of evidence that leads inevitably to a sort of judgment that surpasses the verisimilitude of balance. Goliath is worthy of consideration as a serious work of journalism, and, to a lesser degree, historiography. It is one of the most important titles published on the Israel-Palestine conflict in the past few years.

I offer this claim for numerous reasons, primary among them the painstaking research evident in the book. Blumenthal interviewed a huge number of people for Goliath and incorporates into his analysis a vast range of commentary, reportage, legislation, and personal narrative. While he periodically provides historical context, Goliath is highly topical, largely affixed on the Israel of today, and in relevant spots, of the past few decades.

The book does not have a distinctive central thesis. It is not merely a specific condemnation of Zionism, an extended commentary, or investigative reporting. It is all three of these things simultaneously, while also telling stories both personal and allegorical. Blumenthal explains, “These are stories of people living under a regime of separation, grappling with the consequences of ethnic division in a land with no defined borders” (p. xvi).

The word “stories” illuminates Blumenthal’s methodology. Goliath is not a linear narrative; it tells multiple stories—more detailed than vignettes, but not quite sagas, either—that present for readers a compelling understanding of the daily realities of Palestinians and the mentality of segregation among many Israeli Jews. One story, for instance, relates Blumenthal’s interactions with liberal Israeli novelist David Grossman, who is shown to be afflicted with profound cognitive dissonance regarding the origins of Israeli violence. Another story recounts military aggression at a protest in the Palestinian village of Nabi Salih. Blumenthal often explores state violence against peaceful demonstrations. If his focus can be distilled to a singular theme, it would be the consistent mendacity on display across political, economic, and cultural strata in Israel vis-à-vis the inherent iniquities of the Zionist project.

Blumenthal is relentless in his critique of that mendacity. Readers of his book will not wonder about his sympathies, a fact that helped generate so much controversy. It is useful for us to move beyond Blumenthal’s tone (which I find perfectly appropriate) and examine how well of a case he presents about Israel’s fundamental problems. Here even Blumenthal’s most adamant critics will have difficulty proffering a convincing rejoinder. He expertly implicates Israeli politicians in a wide range of discriminatory and violent practices.

Blumenthal spends significant time on the condition of Palestinian citizens of Israel. He observes, “while Israel had always discriminated against its Palestinian minority as a matter of national policy, the ascent of [far-right party Yisrael Beitenu leader Avigdor] Lieberman and a rightist-dominated Likud faction signaled a collective vote in favor of stripping away whatever remained of the country’s democratic patina” (p. 17). The rise of Lieberman more or less demarcates Blumenthal’s temporal focus, though Blumenthal is good about providing contextual analysis to contemporary matters.

As to the Palestinian citizens of Israel, those who believe in the myth of equal rights for all Israeli citizens now have reason to be less optimistic about the condition of Israeli democracy. Lieberman is the central character of Blumenthal’s narrative, but anti-democratic practices, Blumenthal makes clear, extend to the domain of Israel’s liberal elite. He catalogues a long list of discriminatory legislation—some passed into law, others under deliberation—meant to marginalize Palestinian citizens of Israel as a permanent fifth column. Many scholars of the Middle East know about this sort of discrimination, but to encounter it in such organized proximity can feel remarkably disconcerting.

Blumenthal also covers Israel’s practices in the occupied Palestinian territories, as well as Israeli interaction with neighboring nation-states. Ultimately, Goliath is more about Israel than it is about Palestine, though it is difficult to untwist the two. Perhaps it would be better to say that Goliath is about Israel’s attitudes and practices toward Palestinians and other minorities, with a healthy skepticism about the ability (or desire) of the state to overcome the inherent structural prejudices that render it an ethnocracy rather than a democracy.

The book is riveting and well-written. Blumenthal is a fantastic storyteller and has a gift for using subtle sarcasm to great effect—it is detectible without being overwhelming or gratuitous. Goliath would certainly be appropriate for classroom use, though it has potential to be one of those fabled “controversial texts,” as it was produced and marketed for a general readership. One need not be a devotee of Palestine to enjoy Goliath. One simply needs to enjoy dogged, committed journalism, unafraid to express a point of view based on evidence that demands such expression.

Steven Salaita is associate professor of American Indian studies at the University of Illinois at Urbana-Champaign. His latest book is Israel’s Dead Soul.