Pappe: The Idea of Israel: A History of Power and Knowledge 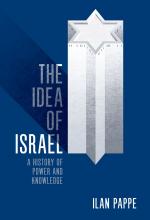 Ilan Pappé is well known to the readers of this journal as a prolific author of Palestine studies and one of the Israeli intellectuals who engaged most radically in the deconstruction and refutation of the Zionist narrative on Palestine. This book is primarily an incursion, by Pappé, into Israel studies: it is a work not directly about Palestine, but rather about Israel. More precisely, it is about the battle over “the idea of Israel” (i.e., the representation of the Zionist state that prevails in Israel and the challenge Israeli intellectuals pose to that representation).

In many ways, Pappé’s new book is a continuation and expansion of his autobiographic Out of the Frame: The Struggle for Academic Freedom in Israel (2010), in which he describes his personal trajectory. In his new book, he provides the wider picture: the historical, intellectual, and political context that led to the emergence, rise to fame, and dwindling of the group of New Historians and “post-Zionist” figures of the Israeli academic and cultural scenes, of which Pappé was and remains a prominent member.

The Idea of Israel starts by setting the backdrop to this development. In a short first part, Pappé sketches the main contours of the academic and fictional representation of Israel that complemented official Zionist ideology during the state’s first decades. The second part of the book, entitled “Israel’s Post-Zionist Moment,” constitutes its core. It starts by paying tribute to those whom Pappé calls “the trailblazers” in an initial chapter that is inevitably incomplete in its brevity. It is followed, however, by a much more extensive depiction of the emergence of the New Historians and their revision of Israeli historiography of the 1948 war. This revision led to what Pappé describes as the “post-Zionist” moment proper: the heyday in the 1990s of this intellectual trend that included a few anti-Zionists, but refrained, for the most part, from putting into question the very existence of the Israeli state.

After an exploration of the debates about history and the nature of the Zionist project, Pappé examines the post-Zionists’ deconstruction of the misuses of Holocaust memory in Israel and their critique of the Zionist effort to erase the original identity of the Mizrahim. He designates the Mizrahim principally as “Arab Jews,” a label that is disputed, as many of them do not recognize themselves in this designation, nor do they all originate from Arab countries. Thereafter, the portrayal of the “post-Zionist moment” moves on to the cultural sphere—first music and the news media, and then stage and screen.

The six chapters devoted to this very particular moment of Israel’s history in the short-lived euphoria that greeted the 1993 Oslo Accord constitute the most comprehensive account of the post-Zionist phenomenon to this date. The fact that this section is also a testimony by one of the key actors of this experience, writing in a lively style, enhances its appeal and makes for pleasant reading. This advantage compensates for some subjectivity and lapse in memory that leads to a few minor inaccuracies.

One example of such an inaccuracy is the citation of Benny Morris’s book The Birth of the Palestinian Refugee Problem, 1947–1949 as having been published in 1988, (p. 114), a year after Simha Flapan’s The Birth of Israel:Myths and Realities. However, both books actually came out in 1987.

Additionally, a preliminary chapter dedicated to a systematic historical contextualization of post-Zionism would have been useful. As it stands, contextualization in the book is scattered non-chronologically over various chapters. Nevertheless, critical moments such as the central role played by the 1982 invasion of Lebanon and the Sabra and Shatila massacre in the emergence of a new critical mindset among Israelis does stand out, as does the fact that the launch of the Oslo process after the peace treaty between Egypt and Israel relaxed Zionist ideological mobilization.

By the same token, the end of Oslo at the turn of the century rang the death knell of the “post-Zionist moment.” The book’s last two chapters deal with the triumph of “neo-Zionism”—aterm that Pappé fails to attribute to Uri Ram who defined it ten years ago.* Neo-Zionism is the ideological accompaniment to the right-wing drift of Israel’s society and polity as epitomized by Ariel Sharon’s electoral victory in 2001. It is a harsher version of Zionism, quite more openly ethnocentric and supremacist than what mainstream Zionism used to affect in the past century.

Pappé’s two chapters on neo-Zionism and its impact on recent Israeli historiography bring precious information to readers who do not know Hebrew. If hypocrisy is the tribute vice pays to virtue, neo-Zionism feels no need for it, as it prides itself on what used to be regarded as vice. Hence, it doesn’t shy away from bluntly acknowledging the reality of “ethnic cleansing” in 1948, presenting it not as Israel’s “original sin” but as legitimate “self-defense”—an attitude best epitomized by New Historian-turned-neo-Zionist Benny Morris.

Ilan Pappé presents his book as “in many ways, post-Zionism’s post-mortem,” (p. 132) asserting that “there remained no trace of the formerly impressive presence” of its point of view after 2000 (p. 257). The book thus ends on a bleak note: “The impressive and hopeful challenge from within has disappeared” (p. 311). Whatever remains of it in the intellectual sphere is almost akin to underground resistance. Today, maintains Ilan Pappé, the ideological battle against Zionism takes place “mostly outside the entrenched state, although quite a few fugitives from it are important partners in this enterprise” (p. 311). Tom Segev, who saw the turn as early as 2001, had a more optimistic conclusion then: post-Zionism is “out at present,” he wrote in his Elvis in Jerusalem: Post-Zionism and the Americanization of Israel (2002 in English translation). “But the deeper developments that indicated a post-Zionist future were evidence of something Israelis had begun to recognize: There is life after Zionism” (p. 161 Segev). The future will tell whether neo­Zionism’striumph wasalsobut amoment.

Gilbert Achcar is a professor of development studies and international relations at the School of Oriental and African Studies (SOAS, University of London) and Chair of the SOAS Centre for Palestine Studies. He is the author of The Arabs and the Holocaust: The Arab-Israeli War of Narratives (2010), The People Want: A Radical Exploration of the Arab Uprising (2013), and numerous others.