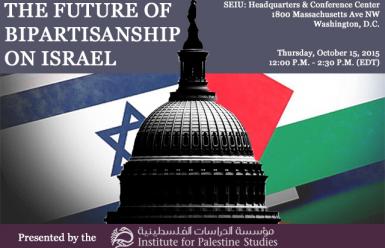 The United States’ deep ties with Israel and the evolving relationship between the two countries has broad ramifications that range from the local political to the geostrategic. In this panel discussion, hosted by the Institute for Palestine Studies, four experts will explore the evolution of Republican and Democratic Party positions on Israel and Palestine, Congress as an actor in shaping U.S. foreign policy, how U.S. policy toward Israel and the Palestine question impacts broader U.S. national interests, and the influence of Islamophobia and the role of the Evangelical community in shaping U.S. policy. This discussion comes at an important time in the 2016 presidential election race and touches on the latest issues related to American policy on Israel and Palestine and what changes we might expect to see in American policy towards Israel.