Bouris: The European Union and Occupied Palestinian Territories: State-Building without a State 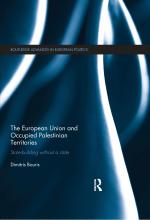 Historically, the Palestinian leadership debated two paradigms: “liberation-before-state” or “state-before­liberation.” The Fatah leadership of the Palestine Liberation Organization (PLO) chose the latter and pursued the peace settlement route that led to the signature of the Oslo peace accords. Two decades after Oslo, neither a sovereign Palestinian state nor a just peace has been realized. Additionally, since the Oslo accords, the international community has invested more than $24 billion in “peace or/and state-building” in the occupied Palestinian territories (oPt). However, despite the glowing state-building rhetoric, facts on the ground illustrate an entrenched Israeli military occupation, and deteriorating socio-economic conditions of the Palestinians.

The European Union (EU) and European countries are the biggest donors for the Palestinians and for the Palestinian Authority (PA)’s state-building project. They are well-known to be good “payers” but bad “players,” and their intervention is fraught with contradictions. The EU has failed to become a major peace broker, despite the leverage of its aid to the Palestinians and its preferential trade relations with Israel. The sticks-and-carrots game played by the EU reinforces the conventional wisdom in the occupied West Bank and Gaza Strip that the “the U.S. decides, the World Bank leads, the EU pays, the UN feeds.”

On these grounds, Dimitris Bouris’ The European Union and Occupied Palestinian Territories: State-Building without a State aims to tackle one central question: How effective has the EU been in its state-building policies towards the oPt? The effectiveness of the EU as a state-builder is measured through three major criteria/parameters: namely, generation of legitimacy, coherence, and regulation of violence/ability of enforcement. Drawing on over 140 interviews with European, Palestinian and Israeli interviewees to reflect the “voices from the field,” Dr. Bouris examines in particular the EU role in the Security Sector Reform, Judiciary Sector Reform, and the rule of law in the oPt.

Bouris, who received his PhD from the University of Warwick and is a research fellow at the European Neighbourhood Policy Chair, College of Europe (Natolin), argues that the distinctive EU role in the state-building project, in comparison with the models of the UN or the International Financial Institutions, means that the “EU is opting for state-building as a means to conflict resolution in its approach to the Palestinian question” (p. 2). Bouris highlights the incoherence and inconsistency in the EU policies and practices and problematizes the emerging gap between rhetoric and reality. The author argues powerfully that “in reality, the EU has supported a technical and training approach rather than a genuine Security Sector Reform (SSR) process promoting democratic civilian oversight and accountability” (p. 95). The author also argues that “the main obstacle to the EU’s efficiency in the domain of SSR is the EU itself and this has significant reverberations not only for the security sector, but for the whole state-building project carried out in the OPTs” (p. 95). This technically-oriented and politically-constrained EU approach means that the “EU is trying to promote the rule of law dimension in the OPTs in an authoritarian rather than democratic manner” (p. 162).

While some of the arguments in the book are not new, they are skilfully presented, theoretically embedded in the literature, and sharpened by the wealth of the “views from the field.” In particular, the three parameters (and their sub-criteria) used to measure the EU’s effectiveness as a state-builder are distinctive features of this book. The centrality of the three parameters in the analysis is helpful, but it made the text repetitive at times, and limiting and constraining at others. The book is informative at both the theoretical and empirical levels. It introduces the reader to the literature on state-building, liberal peace, and the EU’s approach and role as a state-builder. In addition, through the lenses of the above-mentioned parameters, the book assesses the role of the EU’s security missions in the oPt (EU Co-ordinating Office for Palestinian Police Support and EU Border Assistance Mission Rafah), and the EU’s initiatives in the domain of judiciary sector reform and rule of law.

Though perhaps it is due to research design more than oversight, it is still quite puzzling why the issue of security collaboration between Israel and the PA is not discussed. It is a major source of tension between the Palestinian people and the resistance movement and the PA leadership, and a main source of the eroding legitimacy of the PA. The methodology of utilizing the “voices from the field” overlooks the potentially interesting gap between the EU officials in Brussels and those working in the West Bank and Gaza. Finally, the understanding of the “legitimacy on the ground” and “local ownership” concepts, as well as the way the EU has operationalized them, is quite problematic on certain occasions, since it assumes linearity and dismisses multiple complex layers. But these concerns are relatively minor in contrast to the book’slargercontribution tothe scholarly work on Palestine, the EU, and the state-building ventures in conflict-affected areas. Bouris has written an informative book that reflects the predictable outcome for attempting to launch a state-building project before liberation.

Alaa Tartir is a doctoral candidate and researcher in international development studies and political economy at the Department of International Development, London School of Economics and Political Science (LSE).