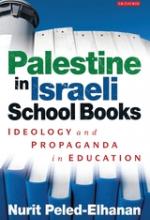 When the first Palestinian school books were issued by the Palestinian Authority (PA) in 1995–96, they were scrutinized by pro-Israeli groups who accused the PA of instilling hatred of Jews and Israelis in Palestinian youths. These reports (mostly published by a settler in Efrat) prompted threats from the U.S. Congress and the president to cut off international assistance to the PA. In my book on the subject, I offered an entirely different explanation. I suggested that these texts, produced in the context of the post-Oslo agreement, actually laid the foundation for the construction of a political identity that eschews resistance (to occupation) and opts for a truncated Palestinian state alongside Israel.

In the conclusion of her study on the representation of Palestine/Palestinians in Israeli school books, Nurit Peled-Elhanan maintains that these same books instill racist attitudes and enhance ignorance of “. . . the real social and geopolitical situations and of geographical and historical discourse.” Upon graduation from secondary school, young Israelis are drafted into military service to implement Israeli policies against Palestinians “. . . whose life-world is unknown to them and whose very existence they have been taught to resent and fear” (p. 232). How does Peled-Elhanan arrive at such conclusions?

She constructs a sophisticated and multidimensional approach to deconstructing the contents, omissions, and elisions of a select number of school texts: ten history, six geography, and one civic study. All were published between 1996 and 2009, in the post-Oslo period. On several occasions, she takes issue with Elie Podeh and Ruth Firer, both from the Hebrew University, who suggest that fourth generation texts (post-1999) are more balanced and less stereotypical of Palestinians. Instead, she finds that these texts continue to invoke racist stereotypes and simply exclude Palestinians. For example, she demonstrates that in schoolbooks for grades one through four “. . . Palestinians, either the citizens of Israel or the Palestinians of the occupied territories, hardly exist” (pp. 58–59).

In many ways this study is anchored in the vast literature on identity formation and consolidation, and the role of the state (education institutions) in constructing and cementing a linear narrative of belonging to the land. Hence, Israeli Jews are presented as the “home-coming indigenes” (p. 2). In this connection, Yael Zerubavel shows in her book Recovered Roots (University of Chicago Press, 1995) that the construction of modern Israeli identity employs discursive techniques and narrative forms that exclude the other (Palestinian-Arab history). This elision is intended to enable the state to form a strong collective identity. This quest leads not to an understanding of the past but to “. . . construing a ‘usable past’ that would justify ‘our’ way while de-legitimating ‘their’ way” (p. 2). In effect, a “usable past” serves the interests of the present (domination and occupation) and the future (more domination).

Peled-Elhanan eschews simplistic approaches in the study of schoolbooks, namely content analysis. Instead, she proposes a more elaborate and sophisticated approach that studies texts as discourse, rhetoric, and their underlying semiotic means of communication. She augments her study with a “multi-modal” reading of the texts under study. She dubs her method as “social semiotic inquiry,” which entails four variables—discourse, modality, genre, and style. This means that in addition to text she focuses on images, graphics, layout, and the positionality of image to text. For example, she juxtaposes two representations of people to maps and geography. Figure 11 (p. 129) demonstrates the geographic spread of the Arab population in Israel. Two “Arabs” dressed in traditional garb are placed outside the map, across the Jordan River “. . . clearly separated from their residential areas . . . [in Jordan], where Israel has always tried to transfer them” (p. 128). In contrast, figure 12 (p. 131) depicts Jewish immigrants arriving in Israel. The new arrivals are depicted in the form of figurines that are squarely placed inside the map. These Jewish immigrants are marching “directly into the occupied territories” (p. 130). One can deduce from such representations a subliminal (and overt) message: The land is one, united and with luck will be “free” of Arabs and Palestinians.

Peled-Elhanan demonstrates that all Israeli schoolbooks hold some common assumptions about Palestinians and history. They emphasize Jewish historical rights to the land. Arabs are hateful and a threat to the state. Also, the Arabs have twenty-one states and the Jews have only one. Palestinian citizens are seen as a demographic problem (or threat). The Palestinians in the occupied territories must be controlled, otherwise they will kill Israelis. Therefore the only solution resides in: “A Jewish state, Jewish majority, Israeli control” (p. 21).

In chapter 1, Peled-Elhanan demonstrates how Palestinians are dehumanized, and often depicted in cartoonish and racist language and images. Rather than incorporate the work of revisionist writers, which details the expulsion of Palestinians in 1948, the victims and Arab states are blamed for the nonresolution of the Palestinian refugee question. The texts also convey a simple message: “Since the Palestinians left their land they do not deserve to have it back” (pp. 86–87). Instead of coming to terms with the historical evidence of Plan Dalet, the texts omit the impact of massacres (e.g., Dayr Yasin), instead they present the positive outcome, namely the military power of the Yishuv was strengthened. Chapter 4 shows how these episodes (e.g., massacres and expulsions) are legitimated by their outcome. Hence, despite the unfortunate nature of the events, they are deemed beneficial for Israel.

What is a soldier to do? Does he obey or disobey? The schoolbooks that taught him/her imbued them with fear of a dehumanized “other.” Indeed, school texts can be seen as a weapon whose use is justified precisely because the “other” is actually an imposter and an intruder. The soldier is the true “indigene.” With such logic, how can an Israeli soldier ever consider the “other” as an equal? Israeli education, as currently constructed, disallows education for peace and coexistence from its curricula (p. 232).

Peled-Elhanan has produced an exquisitely valuable study. It is both complex and simple. It is a masterful presentation of how ideology enables the state to construct an educational system built on the perpetual exclusion/expulsion of the Palestinian other.