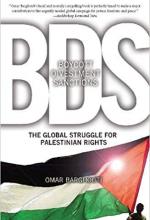 In his book, Boycott, Divestment, and Sanctions: The Global Struggle for Palestinian Rights, Omar Barghouti discusses the international civil society campaign called for by Palestinians that has steadily captured the imagination of social justice activists and earned the ire of ardent establishment representatives. Published in 2011, ten years after the launch of the first US-based divestment campaign and six years since the Palestinian civil society call for BDS (www.bdsmovement.net/call), Barghouti's manuscript traces the development of the international movement, the internal struggles that have been fought within it, and the compelling reasons why everyone who supports Palestinian self-determination should join its fold.

Barghouti, an independent Palestinian activist and dance choreographer, is a founding committee member of the Palestinian Campaign for the Academic and Cultural Boycott of Israel (PACBI), the body that spearheaded the international call for BDS. He organically emerged from an activist neighborhood and a Palestinian community as a leader of this global movement. His familiarity with the BDS movement’s internal struggles, as well as its steady and often controversial development evidences Barghouti’s role as a participant-leader. It is the sincerity of this work and its true embodiment of a scholar-activist’s praxis that makes it so worthwhile.

The book's sixteen chapters illustrate a movement in progress. They include public responses to institutions like the American Association of University Professors. It also includes three collaborative essays or letters written in partnership with other leaders of PACBI: Lisa Taraki, Haidar Eid, and Jacqueline Sfeir. Two of the chapters are previously published interviews with Barghouti and at least two other chapters grapple with specific case studies. The appendices constitute approximately one-tenth of the book and reflect the movement's guidelines and written products.

Together these essays, letters, interviews, and appendices serve as an introduction to, and an argument for, BDS. They reveal the difficult and strategic considerations facing BDS activists, as well as the thoughtfulness with which those challenges are overcome. Again and again the reader is reminded that while BDS may be a tactic, it is not a stunt. It reflects thoroughly deliberated principles and is constructed to ensure sustainability. This book is the first to be written about BDS, thus filling a gaping literary hole of this emerging genre. Despite the movement’s mounting significance and growth for over a decade, only a handful of articles had hitherto attempted to study its normative content and utility. Since its publication, Verso has published a collection of essays entitled The Case for Sanctions, in support of BDS. While the available literature is substantive, it is quantitatively meager and stands to benefit from more contributions.

The discussion about BDS is potentially multidimensional. It includes historical observations about the sites in which BDS campaigns are being waged and touches upon the schisms within political spaces that simultaneously support Palestinian self-determination and disagree about its meaning. The BDS movement illustrates the evolving nature of global solidarity in a world dominated by a single superpower. It also implicates the role, reach, and limits, of human rights in a post-WWII order. In his work, Barghouti attempts to cover as much of this landscape as possible. While he does a tremendous job, his greatest contribution is his argument for a rights-based movement as a necessary response to the racially exclusionary ideology of Israeli-Zionism.

Barghouti proffers that while Palestinian rights are inalienable and Israeli ones are acquired, both sets of rights stem from the same spring of international law and justice is served when the law treats them with equality (p. 51). The BDS movement thus shifts the discourse beyond state-centric considerations and constructs new and imaginative ways of conceptualizing Palestinian self-determination. Barghouti explains that BDS is a rights-based approach to the Palestinian-Israeli conflict that articulates the Palestinian condition as a humanitarian one and defines justice for Palestine as the remedial treatment of injustice to the persons comprising the Palestinian national body, severally and together. Rooted in international law and human rights norms, BDS is a non-violent tactic with maximalist aims. It seeks to achieve the revolutionary dismantlement of visceral and structural violence by the incremental attainment, and, ultimately, the full enjoyment, of rights.

However, the book is not just a discussion of BDS; It is also an honest and unabashed critique of the political ideology that has engendered the dispossession and displacement of Palestinians and which fuels ongoing colonial expansion upon Palestinian lands. Zionism, in its practical application in Mandate Palestine, is conditioned upon the mutual exclusion of the Palestinian people. Barghouti accordingly argues that the struggle is for “equal humanity” among Jewish Israelis and Palestinians irrespective of Palestinian national independence (p. 60).

BDS is thus a revival of a discourse that once framed the conflict in those terms before it was sterilized and managed by the dictates of the Oslo Peace Process. In 1991, in an effort to build on the achievements of Oslo, the UN General Assembly repealed the 1975 Resolution declaring “Zionism is Racism.” In 2001, after nearly a decade of Oslo’s failures and a year into the Second Palestinian Intifada, civil society organizations converged upon the UN World Conference against Racism in Durban. There, they resuscitated the language of the 1975 resolution and declared that Zionism is Racism and that Israel is an Apartheid State. Still, BDS did not gain significant momentum until years later.

Barghouti argues that until the 2008/09 winter onslaught of Gaza, state and non-state stakeholders had felt that constructive engagement sufficed to resolve the Israel-Palestinian conflict. However, Israel’s pounding of Gaza and the use of indiscriminate and wanton force evidenced a rejection of Palestinian humanity and the earliest indices of a genocidal campaign to remove them completely. Barghouti writes,

“Israel is no longer ‘just’ guilty of occupation, colonization, and apartheid against the people of Palestine…it has embarked on what seems to be its final effort to literally disappear the ‘Palestinian problem.’ And it is doing so with utter impunity. The world cannot continue to watch. Thus BDS. Thus now” (p. 47).

Indeed, Barghouti’s treatise serves as an urgent and compelling call to join the movement. While its rich discussions may make it less useful as a primer for those unfamiliar with the campaign, the book is a powerful rejoinder to BDS’s critics and the perfect antidote to allies still “stuck on the fence.”

[1] Noura Erakat is a human rights attorney and activist. She is currently the Abraham L. Freedman Teaching Fellow at Temple University, Beasley School of Law.