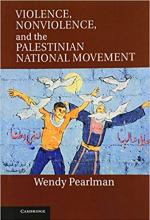 Wendy Pearlman’s Occupied Voices: Stories of Everyday Life from the Second Intifada articulates the experiences of ordinary Palestinians, allowing their voices to reach larger audiences. Pearlman’s interest in the Palestinian struggle, whether it be violent or nonviolent, emerged from a question frequently asked by her American audiences: “Why do Palestinians carry out violence against Israelis?”

Consequently, Pearlman poses two main questions in Violence, Nonviolence, and the Palestinian National Movement: Why do some self-determination movements use violent protest and others nonviolent protest, and why would a movement employ different protest strategies at different points in time? To answer these questions Pearlman focuses on the effects of a movement’s internal organizational structure on its protest strategy. She develops the “organizational mediation theory of protest,” which concerns the movement’s level of cohesion or fragmentation, arguing that “a movement must be cohesive to use nonviolent protest, and fragmented movements are more likely than cohesive ones to use violent protest” (p. 11). Leadership, institutions, and collective purpose are the indicators of a movement’s cohesion. Internal cohesion and successful management of fragmentation facilitate mass mobilization, discipline, and a coherent strategy that are “requisite for the very occurrence of most forms of nonviolent protest in ways that they are not for violent protest” (p. 12). Fragmentation, on the other hand, “is the organizational structure in which intra-group competition spurs violent protest” (p. 14). Internal rivals, Pearlman contends, compete against each other by radicalizing protest against the movement’s external adversary (p. 14). Using archival materials, government documents, memoirs, newspapers, survey data, and interviews, Pearlman applies her general theory to the Palestinian national movement over one hundred years. She begins with the Palestinian national struggle under British rule, and continues with the rise of the PLO, the first intifada, the Oslo peace process, and the second intifada. She devotes a chapter to comparisons with South Africa and Northern Ireland. Throughout, Pearlman insists that it is the “organizational structure of the Palestinian struggle as a movement, not the collective consciousness of Palestinians as a people, that has mediated forms of protest” (p. 21).

The “organizational mediation theory of protest” sheds light on an important aspect of the forms of struggle used by self-determination movements previously neglected by scholarly studies. Yet, the application of the theory to the Palestinian struggle exposes its limitations in capturing armed or violent struggle within its framework. The shortcomings of the theory stem from the nature of the question that drove Pearlman’s investigation. Beginning the inquiry with a politically directed question, such as why Palestinians carry out acts of violence against Israelis instead of using nonviolence, turned the author’s attention to the nature of the organizational structure of the Palestinian resistance movement, not to the effects of all forms of violence constitutive of the Zionist settler-colonial project. Pearlman does not deny the latter violence, but would claim that the effect of colonial violence “is not automatic, but mediated by the national movement’s organizational structure” (p. 45). Pearlman’s over-emphasis on the internal organizational structure of the Palestinian resistance movement distracts her from capturing the dynamics of revolutionary violence necessary for decolonization which “implies the urgent need to thoroughly challenge the colonial situation.” Dwelling on the fragmentation of the Palestinian resistance movement as the mediation for violence appears at times one-dimensional, glossing over the continuous colonial violence that cultivates the seeds of its counter violence. It neglects the articulation of the complex constellation of factors that affect the forms of protest employed, and the high levels of organizational structure necessary for armed struggle. For example, analyzing the era of British rule, Pearlman states, “Internal rivalries thus contributed to violence apart from those impetuses stemming from British policy or the overriding conflict with Zionism” (p. 46) [emphasis added]. And on the post-Oslo era she contends, “Had Palestinians been more united behind the negotiation process, the Jerusalem excavation might not have triggered violence” (p. 143).

While the author offers a valuable contribution to the study of the Palestinian national movement over its one hundred years of struggle, it overlooks the critical role played by different Palestinian social classes and varying ideologies within the movement in the means of struggle employed. A social class whose interests are contingent on the international community and the colonist’s recognition will employ diplomatic means of struggle that serve this end. Likewise, a social class whose material conditions are crushed under colonial rule compose the radical force in resistance movements, absorbing the colonial violence, and thus radiating revolutionary violence.

Lena Meari is a postdoctoral fellow at the Center for Palestine Studies at Columbia University.